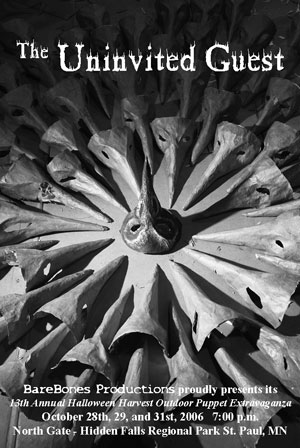 The Uninvited Guest was based on The Masque of the Red Death by Edgar Allen Poe. Prospero is hosting a party in the fortress of freedom where those of wealth are invited to seek refuge from the plague.

Audiences will gather outside the gates for a shadow puppet show detailing this plague. An invitation will be issued and audiences will make their way down a trail of superstition to the pageant site where a masquerade ball is in progress.

As the guests make their way from room to room they discover that from which there is no escape.

As has become customary, the pageant included a section where members of the audience are invited to honor friends and relations that have passed on. People are also offered a chance to do so privately afterward at artistic installations set up on site for this purpose. A reception following the performance in the Hidden Falls Park pavilion provided food, drink and live music.

This activity was made possible in part by a grant from the Metropolitan Regional Arts Council with funds appropriated by the Minnesota State Legislature.

I missed going to the river this year. It would be nice to have the Halloween Show ASL-interpreted b/c it can be extremely hard to hear the dialogue. Other than that, no complaints. You guys are awesome! Oh… you may have to add more shows. Pretty crowded this year!
- Joe S., Minneapolis

I've been coming to the Barebones Halloween Show for years - it's always enthralling, moving, joyous and funny. But I wonder whether the two puppets could engage in antics that are less violent. That part made me sad. I was afraid of the impression it made on young minds. We live in such a violent culture, could not our creativity produce humor of a revolutionary nonviolent nature? Maybe they could out do each other with gifts or tricks? I know there are nonviolent, non-zero sum games. Thank you for your work, your love + your joy!
-Terry H., Minneapolis