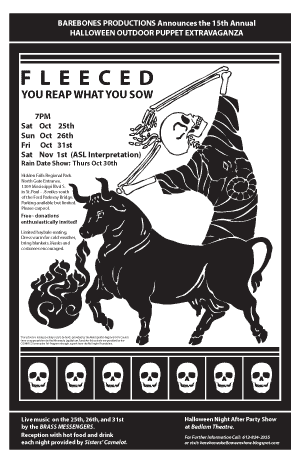 The 2008 BareBones Halloween Extravaganza was based (loosely) on the tale of Jason and the Argonauts featuring a wild pack of dogs, stilted harpies, fire-breathing bulls, and some hard questions about murder, hunger and sacrifice.

Why Jason and Argonauts?

Do we need another story of some white man’s attempted rise to power and his journey with his frat-boy friends, a jealous histrionic woman and a lot of violence? As we looked at this story, not only did some of the creatures and images like the harpies, fire-breathing bulls and the floating body parts start to haunt us, but we realized how relevant it actually was.

Basically, it is a story of the wool being pulled over our eyes. With the creation of the show having a backdrop of Russian/Georgian pipeline intervention, the election and the wall street crunch, we wonder what is our golden fleece that we think we are looking for? What do we sacrifice to get it? When does safekeeping become imprisonment? How do we make sure we don’t go to sleep and let what is precious to us get taken? And so we run around in the cold and dark again this year to ask you to bear witness with us to this time of year and time in history. We ask you to help us bring in the perspective of our ancestors, recent and ancient. Ram and Hydra’s speeches are adapted from Bridget Pegeen Kelly’s amazing poem “Song”.

HYDRA: I am so tired all the time. I am too tired from holding up all these heads.

RAM: Listen: I am a Ram hanging by ropes in a tree All night I hang here and sing. I sing to wake you Hydra. I sing So you will not sleep.

HYDRA: When I hear your singing I feel a hurt in my heart, an ache in each of my heads. I sit up almost awake,

RAM: But then you lay back down again. Wake up. They are coming for me.

RAM: Listen: Jason, the boy in one sandal, Will hack my fleece off. He thinks it will make him king.

RAM: At first you will guard me and Jason will not know what to do. But Jason will have help from Medea who will get you to sleep. They will hang my bleeding body, take my fleece They will do it at night, while everyone sleeps, while you sleep and the Congress sleeps. They will slip the news of it onto the back page and they Will hope that you and everyone else will keep on sleeping. Look here they come now, the soldiers, the sailors, Jason and Medea.

Second Speech During the Heart Scene

Listen: there was a Ram’s body hanging by ropes in a tree.
The Ram Swayed back and forth, and from far off it shone faintly
The way the moonlight shone on the boat miles away
In which the stolen Fleece lay, The body hung in the tree. The Fleece lay in the boat.
The body called to the Fleece. The Fleece to the body.
They missed each other. The missing grew large between them.
Until it pulled the heart right out of the body, until
The drawn heart flew out, flew as a bird flies
To perch in a tree.
Then the heart sang in the tree, softly at first and then louder.
Sang long and low.
But listen, Jason and Medea thought to get
Their Fleece and be done with it. They wanted to get their oil and be done with it.
They wanted to get their victory and be done with it.
What they didn’t know was that the Ram’s heart was already
Singing behind them in the tree. What they didn’t know
Was that the Ram’s heart would go on singing, singing to wake the Hydra. Singing just for them,
Long after the ropes were down, and the election was done
And the occupation was ended. As they repaid the debt and the debt and the debt, they would learn to listen. There would be a song,
Not a cruel song, no, no, not cruel at all. This song
Is sweet. It is sweet. The heart dies of this sweetness.
Tonight we sing to you, tonight when the veil is thinnest between the worlds,
Tonight we ask you to stay awake, to wake up the others,
To remember what has already happened, to remember
Those who have gone before,
Please now sing out the names of your dead, Wake them.
Wake us all.

A MIGHTY BIG THANKS!

...and several dozen others who came on board after this list was made...

2008 show one of Best Ever Sound Great - Music Great - Loved the seating on a hay bale-like Boat, wished I had an oar but kids a few rows in front got it. Fire battle scene spectacular wow rocks waves. Pack of Dogs The Bulls Oh the Bulls Fabulous Show!! Thanks
- Janet G., St. Paul

I was super impressed with this production! I only wish I could have caught on to this sooner so that I could've helped! Congrats on the finale performance. I was within your largest crowd ever! I also have to note that the songs, both lyrically and musically, were beautiful! I especially enjoyed the projected typography "my son" "my father!" I would love to join you fantastic artisans! Sincerely
- Terese E., Minneapolis

I appreciate your thoughtfulness about seating and have a pre-show that every seat is a good seat. The 2007 pre-show to seating area walk was the best ever - loved the small groups of fiddlers and live musicians. I think Barebones is a gem of the Twin Cities - Thank for your work + commitment to this project. I have enjoyed for years + encouraged friends to come every year!
- Sarah U., St. Paul