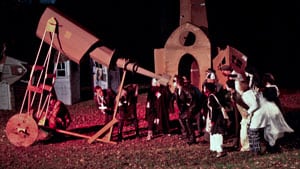 FORETOLD: It's Your Funeral takes place in Deadstown, a river ghost town that never sleeps. Long-sighted Divinators scan the night sky and predict disaster for the towns decaying inhabitants. How far will they go to protect themselves from their own worst fear?

The pageant begins as the audience is led down an ambient trail to the haybale seating. Here they are treated to a feast of otherworldly imagery and illusory orchestration. The pageant ends with a candlelit procession to the Mississippi River for fire drawings and a river puppets finale. A reception follows in the Hidden Falls Park pavilion with food, drink and live music.

The pageant also includes a public naming ceremony during which the audience is invited to honor friends and relations that have passed on. Artistic installations are also set up on site for this purpose.

Bravo! Honestly I can't imagine that I could have an idea that would come even close to the pure divine magic that I experienced this last halloween eve! I was spellbound. entranced. That was one of the most amazing experiences I have had in a long time. . . and yes I do get out much. Thank you & thank you for such a masterful evening of meaning & magic. It was like Heart of the beast and Cirque de Soleil combined!! I would love to participate in any way next year. I am an artist by profession and danced (classical & contemporary) for 15 years
- Tricia F., Minneapolis

We drove 100 miles because it sounded like the best way to spend All Hallow's Eve. The event exceeded all expectations! It was our first time but now as long as you do this, we will be there! Thanks to everyone who worked on this and Blessed Be!
- Chris S., Mankato, MN

We ran in to your production by accident & thoroughly enjoyed the Halloween production. How do we find out when next years production is? or Any other production you may have throughout the year?
- Terri B., Mendota Heights, MN