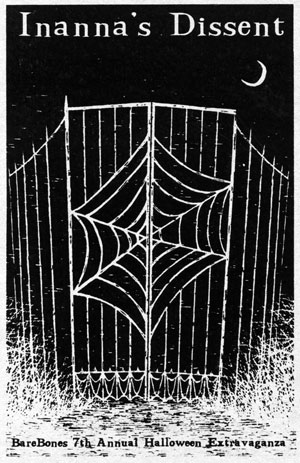 This year's show was inspired by the ancient Sumerian myth of the descent of Inanna, in which Inanna, the Queen of Heaven and Earth travels to the underworld to learn the mysteries of death. To reach the great below, she must pass through seven gates releasing a part of herself at each gate until, at the last gate she chooses to give up her life.

The show begins with a rally against BareBones Productions that is disrupted by monkeys and in turn broken up by stilted, pumpkin-headed police. An innocent is made an accomplice for politically-motivated misfits and is forced to take a journey to the underworld in the guise of Inanna Herself.