Since 1993, BareBones Productions has presented The Annual Halloween Outdoor Puppet Extravaganza, a community-created spectacle pageant of larger-than-life puppetry, drama, stilting, dance, fire, song, and music that honors the circle of life by celebrating its seasonal arc of death in the Fall. 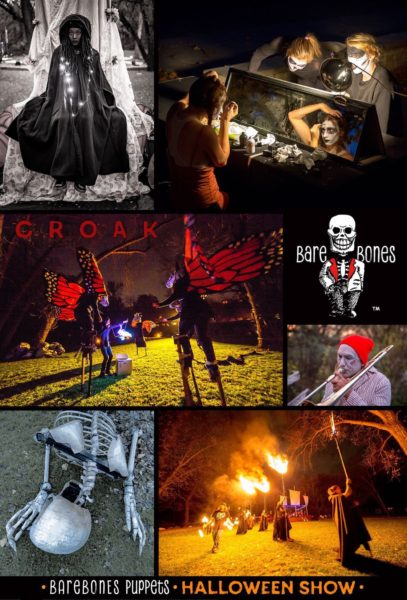 The myriad historical and literary thematic sources for our collaborative and original storyboards have included the Russian folktale of "Baba Yaga and her Fearsome Trials," the idea of "Rot and Compost as Creative Forces," and the ancient Summerian myth of "Inanna's Descent to the Underworld."

The pageant always includes a section where members of the audience are invited, through a public naming ceremony, to honor friends and relations who have passed on.  Everyone is also offered a chance afterward to honor the dead privately with the help of artistic installations such as labyrinths and "hungry ghost" altars set up on the pageant site.  After the performance, the audience joins the cast in enjoying hot food and drink served by Sisters' Camelot, Minneapolis' free organic food distribution collective, and raucous dancing with live music performed by local bands including Gypsy Brass-Americana party legends, the Brass Messengers.

We present the popular "Halloween Show" each year as an alternative Halloween community arts event, appropriate for all ages and without a commercial focus, that takes place in a Twin Cities urban neighborhood park.  Over 250 artists, puppeteers, musicians, performers, builders, technicians, ushers, and helpers of all kinds are involved in the creation of each performance. During the past eighteen years, the Show has grown from one performance to five, and our combined audience has mushroomed from around 100 to over 6,000. The Halloween Extravaganza, through 2009, was built each year on the West Bank in Minneapolis in space and with the generous help of our key collaborator and spiritual twin sister, Bedlam Theatre and, since 2010 in Seward neighborhood with help of our other long-time collaborator, Sisters' Camelot.

In 2020, Masanari Kawahara was selected as one of Star Tribune's Artists of the Year for his performance piece, 8 min. 46 sec. (Movement for Healing), in BareBones' production, OFFERINGS: Artists Respond to the Mourning, Grieving and Fires on Lake Street.

See All Past Shows
Scroll To Top