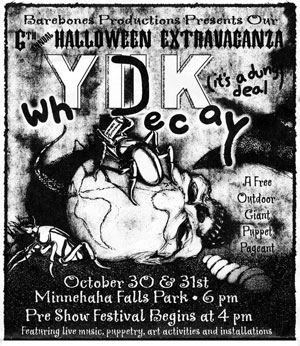 This was BareBones Production's most expansive show to-date and was the 2nd performance staged at Minnehaha Falls Park in Minneapolis. As threats of Y2K loomed, BareBones faced the threat of eco-collapse and considered the process of decay as an ultimately healing force.

The pageant was supplemented by individual puppet performances and installations by local artists and "Stop the Highway 55 Reroute" activists. YDK featured a gigantic three headed dog, Jack O'Lantern and his box of light, a humongous parade of animal skeletons (including a life-sized skeleton of a blue whale!), a transforming, giant, walking, steel spider by Willis Bowman, a 120' long Salamander, a 300' shocking gauntlet of Stilting Scarecrows, and lots, lots more...