Carnetheria was based on concerns that the use of technology and energy without consideration of the possible consequences is causing irrevocable damage, not only to the planet, but to our very humanity, and is inspired by Ray Bradbury's novel, Something Wicked This Way Comes.

Carnetheria is an allegorical tale wherein a mysterious Carnival represents the world and we are tempted to exploit its vast resources for temporary satiation of our desires for comfort and security. At the same time, we acknowledge that through transformation and acceptance of the transitory nature of reality, healing is possible. 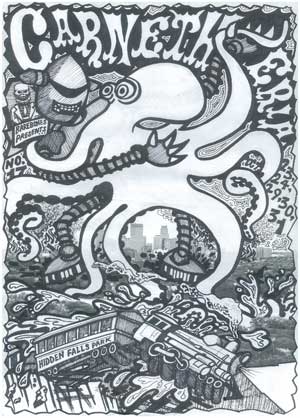 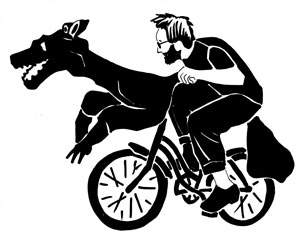 Woodcut print of Ethan Johnson by Yana Frank, from a photo by Jayme Halbritter

The 2010 Halloween Show was dedicated to the loving memory of Ethan Johnson who crossed from This World to the Other World on September 21, 2010, the last day of Summer. Ethan found his way to the BareBones Halloween show in 2006 during production of The Uninvited Guest and, in addition to his myriad other involvements, passions, and fascinations for which he was very well-known, was hooked on the BareBones puppet scene ever since.

Ethan was a steady-on builder, artist, puppeteer, performer, helper, grant writer, planner, supporter, and organizer for BareBones Productions during the four sweet years that we knew him. Carnetheria is the fifth Halloween Outdoor Puppet Extravaganza for which he was an anchor of a volunteer, and now he is both the farthest and the nearest that we can imagine.

Behind the Scenes at Carnetheria

Artists work toward the 2010 Barebones Halloween Show at Sister's Camelot in South Minneapolis. Video by Sheila Regan from City Pages. Read her blog post about BareBones at the City Pages website.

(Will be added soon. Check Back!)

"Thank you for showing us all that it is possible to live life as if it were a song. I love what you do. And it is inspirational to others."

"Dear BareBones Crew: I made it to my first BareBones show last year - The Red Riding Hood/Metamorphosis "Devoured" - I was moved, I was touched, I was amazed! This year there were thrills, chills, and fun, but I couldn't pin down any coherent theme. I did enjoy the opening carnival - the black box musicians and a very young lady fortune teller were my favorites. The Ghost Train made a great dramatic entrance, but in the Main Act, I felt lost at sea. I was intrigued by Lord Dark, his giant chained spectre, the wasps and killer robots were kickass, but by the end I felt worn out from all the W.T.F.? Moments: Campbell's Soup kids - huh? Dancing cupcakes? Killer robots? Squid??? That's too many disparate elements to throw in without a central story-theme to riff off of, like Red Riding Hood, a story we all know, or think we do. I guess it does work as a political metaphor: We search for meaning and get bread and circuses instead, offered by those in authority. "Carnival" is even a powerful metaphor. . . and it was worth experiencing as pure spectacle."

"Wow! This was our first performance we have attended by BareBones, and we already plan to make it a yearly tradition. The energy felt by the performers, as well as by the audience was astounding. This is exactly the performance that every community needs; a place to come together to celebrate life, love and creativity! We were more than happy to contribute to the 'pumpkins' after the event! (The music was incredible! Do we have to wait until next year to see it on CD?) Kudos as well to Sisters' Camelot for amazing food, and Brass Messengers for exceptional music! Well played everyone! Thank you! (I think we are coming again next weekend.) :)"

"I was most impressed with Saturday night's show.  Without having read the handout and being seated on the last row of bales it was difficult to see, but the choice of music with characters' action told the story and was well done."

"I joined in your Halloween celebration on Saturday night with a group of neighbors.  I am writing because I personally want to thank each and every person in your organization for the INSPIRATIONAL MAGIC you created and shared with every human who attended the gathering.  On the same day that Jon Stewart and Stephen Colbert staged their Rally to Restore Sanity extravaganza in Washington D.C., your theatre group restored Sanity in the Twin Cities by actively engaging people of ALL AGES and allowing them to participate in a creative brilliancy that was engaging, inspiring and out of this world.  I left the event feeling more committed to my family, neighbors, community and the Earth and I left motivated to become more active in causes that benefit my community, humanity and all of the Earth's creatures and ecosystems.  What an extraordinary vision, spirit and gift your theatre group has shared with fellow Twin Cities citizens.  From the bottom of my heart and soul... Thank you all... Sincerely"

"Just wanted to drop you a note of thanks--  . . . . I saw the show this year and was somewhat confused but had a great time (i even managed to get a couple of decent photos-- I am told you are looking for pics for an archive?) Got the DVDs too!"

"Thanks for another beautiful and moving Halloween show. This time of year so often gets buried under candy hoarding and acting out, but your work urges us to slow down, to reflect on transience, cycles, the waning of the year, and things worthwhile. You're consistently my favorite part of the season.  Good luck with this weekend's shows,"

"Our family attended and really enjoyed this years extravaganza last Saturday. Thank you for providing spectacular events year after year. We love making this a tradition.  We also loved the brass band afterwards. . . . "

"This year was my third show. . . . Every year is a great new experience but I think what I love the most is the calling out the names of the dead. For me, there is such a deep invocation of what was, what is, and what could have been. Thank you for pronouncing all of your ideas out loud and in such a beautiful way!"

"This was our first year attending your performance and if you were to ask me to exemplify the heart of St. Paul; I'd point to this production! The community, generosity, appreciation and energy among the staff, volunteers, performers and audience participants was infectious and we are incredibly excited to make this an annual event for our family. . . . Thank you.  Continue the great work!"

"I love your shows and my friends and I have been going for the last ten years.. But something isn't right this year... Where was the beauty? the animals? the spirit? the depth? it's denuded.. who's in charge this year?? please.. don't do this.. don't kill barebones!!!"