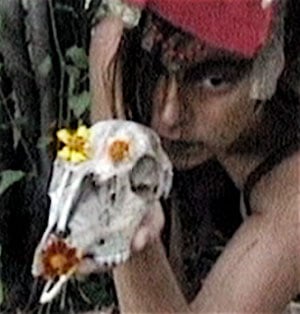 Malia was raised in Bloomington, Minnesota. She attended the Arts High School at the Perpich Center for Arts Education, where she studied music composition and visual arts. After graduating high school in 1994, Malia earned a BA degree in 1998 from the Paracollege at St. Olaf College. She double-majored in Studio Art and “Art as Community Activism”, with additional studies in Performance Art through the School of the Art Institute in Chicago (1996). In 1999, Malia Burkhart began working with In the Heart of the Beast Puppet and Mask Theater (HOBT) as an Americorps volunteer, and has since become an associate artist with the company.

Currently, Malia works independently as a residency teacher, puppet-builder and performer for multiple organizations. With HOBT, her puppets and performances have been featured in mainstage productions including Gyre, Seed, Winter Dreams, Gotama, Invigorate the Common Well, episodes I, II, and III, and smaller touring shows. Malia has been an active member of the all-female stilting performance group Chicks on Sticks since 1999, and has designed puppets and performed in the Halloween Extravaganza through Barebones Arts Collective.

Throughout the school year and summer, Malia teaches arts residencies for grades K – 12 in mask-making and puppetry. She can be booked to come to your school by contacting her directly, or through COMPAS. Malia also teaches arts residencies through the Minnesota State Arts Board, East Side Arts Council of St. Paul, In the Heart of the Beast Theater, The Ordway Center for Performing Arts, and the Minneapolis Institute of Arts.

Malia was a recipient of the 2007 Naked Stages Program through Intermedia Arts and the Jerome Foundation. Naked Stages is an intensive performance research program designed to give artists a supportive environment in which to build their performance and production skills while creating a new performance art piece. Through this program, Malia debuted “The Survival Pages” — a one-woman show investigating her relationship to nature through theater, video projection, dance, and original music.

Malia’s international experience includes: studying Butoh Dance (2001-2003) in Japan with Min Tanaka and Ken Mai, leading a parade section in the 2005 Dream Parade in Taiwan, and participating as a volunteer English teacher on the Peace Boat, where she toured 17 countries around the southern hemisphere over the course of 4 months. Onboard the Peace Boat, Malia led puppet workshops and presented multi-lingual puppet shows in Argentina and Chile, promoting awareness of Global Warming and the water crisis.

Malia Burkhart is a biracial artist of Japanese- and German-American descent.