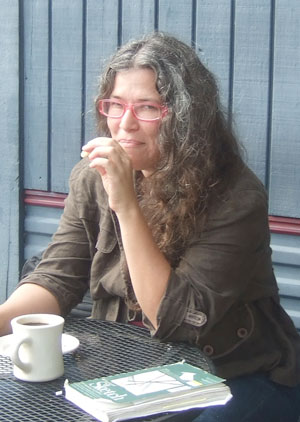 Lelis Brito is a Venezuelan-American director, choreographer, performer and educator of movement-theater who has worked for national and international venues for over 25 years.

Her early training in dance with the Joffrey Ballet and Solange Golovine led her to a professional career in dance, dancing with Dayton Contemporary Dance, Cincinnati Contemporary Dance theatre, and Kei Takei’s Moving Earth amongst others.

Having created over 70 original works to date, including plays, choreographed dances, and visual scenography narratives, she began stretching her compositional thinking at Antioch College in the late 80’s where she studied puppetry and Visual Scenography with Amy Trompetter and others, and developed her performance composition under the tutelage of Dimitra Reber. She moved on to become a member of various performance collectives and collaboratives and locally has performed with In the Heart of the Beast, Trece Lunas Arts Collective, Bedlam Theatre, Rosy Simas Dance Company, Red Eye Collaborative, and more.

She has served as dance faculty at Antioch College, taught dance, composition, and performance for various companies, and has brought kinaethetic education into the public school classrooms through her Kinaesthetic Connections program. For 3 years, she developed innovative family-centered somatic fitness programming for Running Wolf Fitness Center. In 1997 she earned her MFA in dance composition, developing physical approach to Augusto Boal’s Theatre of the oppressed techniques. She continues to develop Boal’s work, most recently teaching at the International Theatre of the Oppressed conference in May of 2009.

She has choreographed and coached stilters and fire performers (most recently for Rah Kojis’ Infiamati) and in 2004 was assistant Director for the Puppetry Arts Studio production of Mercurius Lumens. She is the founder of the Center for Moving Cultures, an organization dedicated to transforming the experienced body through education and performance. She is also a certified personal trainer and body image educator.

After performing with Barebones Fleeced, she joined the Barebones team as co-director of Devoured in 2009, helping to weave multiple visions into a cohesive dream at the end of Fall.