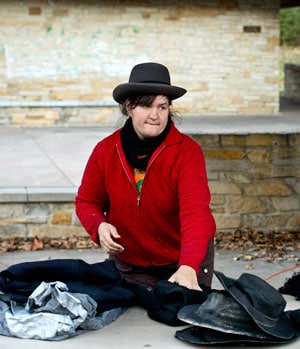 Soozin Hirschmugl is a puppeteer, theater director, visual artist, and spectacle/pageant director. In 1994 she moved to Minneapolis Minnesota and began volunteering with In the Heart of the Beast Puppet and Mask Theater as a production assistant/intern. In 1997 she became a Staff Artist. During her time with the theater she assisted in the creation of, performed in and built puppets for Winter Dreams (1998), Website (1997), Very Old Man with Enormous Wings (1997), and The Hunt (1997). She also started creating her own solo work for their New Work Series Hand, Ear, Eye Mouth (1998). She has also been and continues to work as a regular staff artist on the Annual May Day Parade and Festival.

In 1998 she worked with The Bread and Puppet Theater in Glover, Vermont on the last Our Domestic Resurrection Circus. From 1999 – 2003 she worked as a company member with Bread and Puppet, performing in over 1,000 shows through out the United States and abroad. Her hi-lights are performing and leading workshops at the World Expo, in Hanover Germany (2000), Festival de Liege in Liege Belgium (2001), Anseong Juksan Int’l Arts Festival in Juksan Korea (2001), and the International Festival of Theater in Seoul Korea (2002). She considers the four years she worked with the theater to be her graduate studies of this particular form of puppetry and pageantry.

In 2004 Soozin returned to Minneapolis to continue to develop her own work and to nurture her relationship with Barebones Productions, a group she helped found sixteen years ago. Since her return she has co-directed, designed, and performed in the last four productions.

Since her return to Minneapolis Soozin has developed a reputation as an innovative and multi disciplinary puppet and visual theater artist. During the summer of 2004 she performed with Open Eye Figure Theater, The Adventures of Katie Tomatie, launching the Summer Driveway Tours. In 2005 she created several new works. With In the Heart of the Beast Puppet and Mask Theater she created two small shows as part of the Lake Street Excavation Project, a walking tour and public installation/ puppet performance of the Lake Street neighborhood. For the Art Shanty Projects, a project of the Soap Factory, she created an Art Shanty and Cantasotria, (After the Fall), a sung picture story performance based on the life of Giordano Bruno and the story of Icarus. In 2008 She was selected to create, The Black Box Theater Shanty, a ten seat performance venue. In 2005 as a work in progress for the Bedlam Theater, 10- Minute Play Festival she created Still it Moves, an actor based interpretation of the Bruno and Galileo relationship. In February of 2008 she staged and performed a workshop presentation of, The Starry Messenger, At the Open Eye Figure Theater Toy Theater After Dark Series exploring and intersecting Galileo’s life story using a Japanese style of Cantastoria and a Toy Theater interpretation of the story of Genesis. As part of a fellowship with the Blacklock Nature Sanctuary, a program of the Jerome Foundation she created a Cantastoria based on the etchings of the 14th Century artist Pieter Bruggel the Sr. dedicated to the people of New Orleans and Hurricane Katrina. In December 2007 she was awarded a Jim Henson Foundation Project Grant for the development and staging of the culmination of her work into a full length multi-media puppet production of, Still it Moves.

She has worked as a puppet consultant and collaborator with Alison Heimstead and has presented works with her as part of the Three Legged Race Hand Held/Hand Driven series and at the Chicago Puppetry Arts Festival and with Andrew Kim developing ideas for The Three Penny Opera in Seattle WA, Gotama at in the Heart of the Beast Puppet and Mask Theater, and The Dream Parade in Shizu, Taiwan.