Message from the 2020 Co-Facilitators, Lelis Brito and Harry Waters Jr.

We are at a pivotal moment in history and the time is ripe for a quantum leap in the anti-racism work that BareBones has been exploring for many years. We—Harry and Lelis—want to facilitate a BareBones response that gives voice to the myriad cultural communities in the twin cities, keeps the core BareBones traditions intact, includes the expertise of long-established BareBones artists, explores our collective grief, acknowledges BareBones histories, and centers South Minneapolis, the epicenter of current changes. We want our facilitation to center the bodies, generational knowledge, and expressions of each group. We yearn for an inclusive moving meditation on collective grief in these times of transition. Our collective energies are being challenged to address changes in the way the world is evolving. New ways of being in our spaces are paramount as we seek to heal as well as celebrate. OFFERINGS is witnessed on a continuum, from the artist reflecting on their role in history as they make the work, to the people surrounding the artist and interacting intimately with their art, to the broader community encountering a finished expression.

With love for BareBones and our communities,
Harry Waters Jr. and Lelis Brito

On Sundays in October leading up to the OFFERINGS live pop-ups, BareBones Co-Facilitators Lelis Brito and Harry Waters Jr. had met up with a small group of the artists on Lake St. Each Sunday they connected to the street’s changes and heard from one another’s stories about the pulse of the neighborhood and responses to the recent uprisings after the murder of George Floyd by the Minneapolis police. Out of this exploration, the artists had developed their works in multiple spaces, which took place from Oct. 24 to Nov. 7. 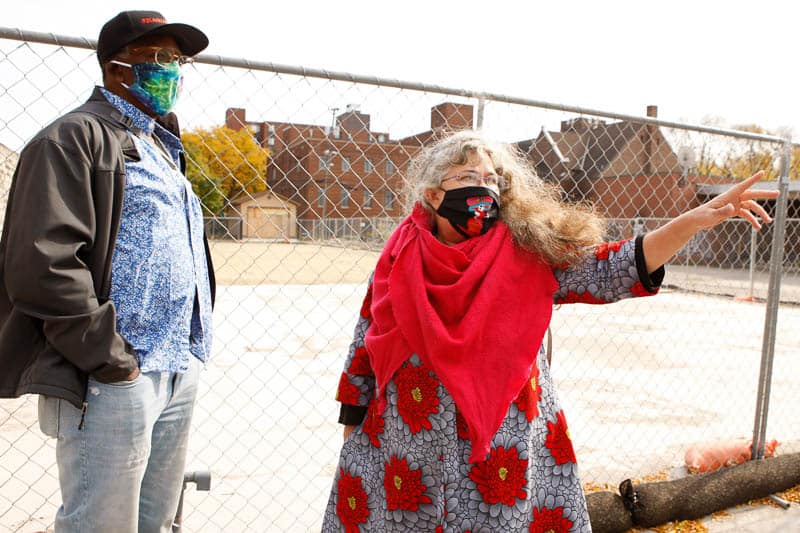 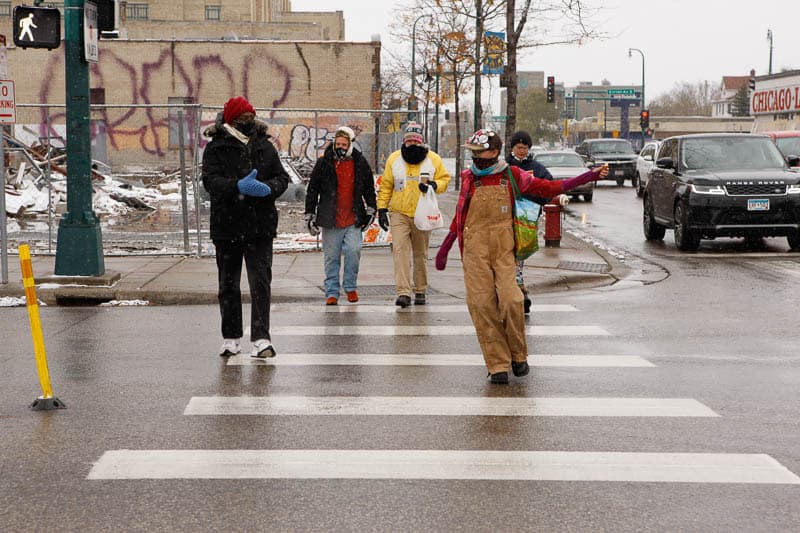 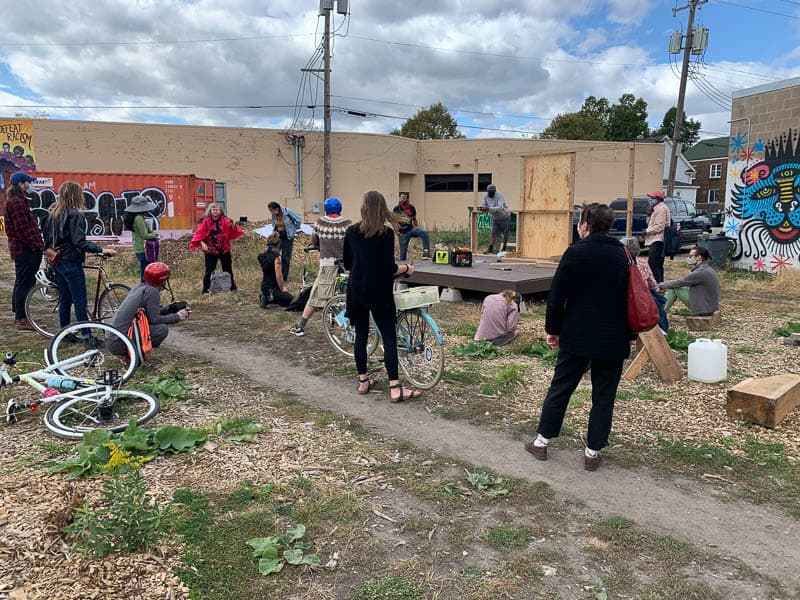 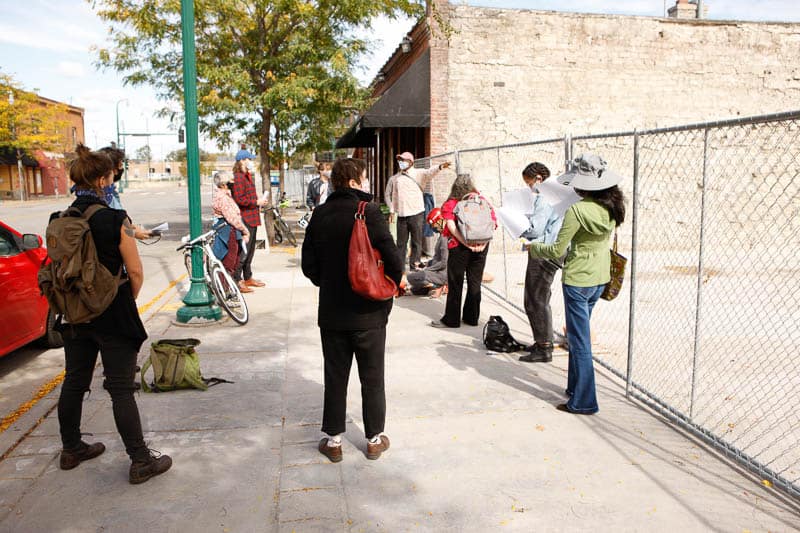 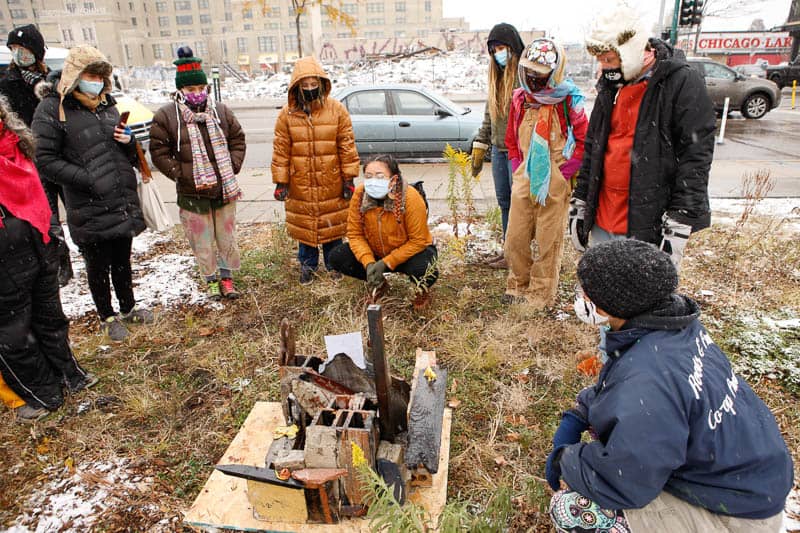 View the Google Map of the past OFFERINGS Live Pop-ups: Oct. 24 to Nov. 7

Lelis Brito is a Venezuelan-American theater director, choreographer, educator, performer, and director of the Center for Moving Cultures. As director of CMC she advocates for tactile/kinaesthetic knowledge in education and cultural transmission. As an artist, she has performed with local and national companies and has created over 70 original works, varying from 6 minute dance solos, to one-hour plays and 3-hour long movement-theatre works. Her Community-based work has included Directing the Barebones Halloween show twice ; Directing the 360* fashion show four times which included training the performers in movement, media, and body image awareness then building a show from participant’s movement strengths; and curating/coaching/directing performances based on science, poetry, and other participant-emergent themes. Brito’s Master’s work focused on somatic approaches to Augusto Boal’s work and she continues to look for playful, experiential approaches to building social justice. 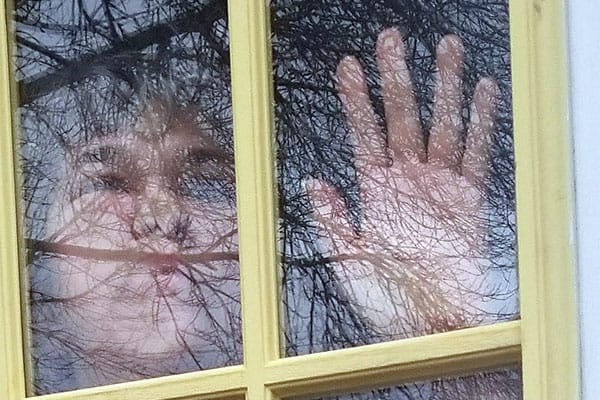 Harry Waters, Jr. created the role of Belize in the first production of Angels in America: A Gay Fantasia on National Themes in 1991. He is most famous for his portrayal of Marvin Berry in Back to the Future (1985) which earned him a Gold record for his rendition of "Earth Angel." Acting Credits also include Adventures in Wonderland, and Big Bully as well as numerous television guest-starring roles. Born in Tulsa, and raised in Denver, Colorado, he attended Princeton University and received his MFA in Directing from University of Wisconsin-Madison. He worked as an actor in New York City on and off Broadway for many years as well as at theatres including Mark Taper Forum, Arizona Theater Company, Berkeley Repertory Theatre, TheatreWorks, ACT and the San Jose Repertory Theatre. Currently in the Twin Cities, he has appeared on stages as diverse as The Guthrie, Penumbra Theater Company, Mixed Blood, Ten Thousand Things Theater, Pangea World Theatre and Park Square in RAGTIME as Coalhouse Walker Jr., Pillsbury House+ Theatre, and Dark & Stormy Theatre. Mr. Waters has directed numerous productions around the Twin Cities (YBGM for Queertopia and HOW TO BE A COMPLETE SOUTHERN WOMAN for the Fringe Festival) as well as around the country (WAITING FOR GIOVANNI at New Conservatory Theatre Company in San Francisco). He has worked as a Facilitator for the Many Voices Roundtable at The Playwrights' Center where he has inspired the careers of numerous emerging writers of color. He is an Professor and recent Chair of the Theatre and Dance Department at Macalester College, where he has directed productions of Runaways, Proof, Angels In America Part I: Millennium Approaches, Th Colored Museum, Tartuffe, Cabaret, The Laramie Project Project, a student devised piec Hip Hop Hopes, In The Blood, The Cradle Will Rock, “green: an elegy to summer” and URINETOWN. This past year he has directed Bulrusher at Sonoma State University and Fences at Nevada Conservatory Theatre. He is working with his son, Jordon Waters, on WING IT (inspired by the tale of Icarus and Daedalus) continuing their performative conversations about fathers, sons, and sexual identity. 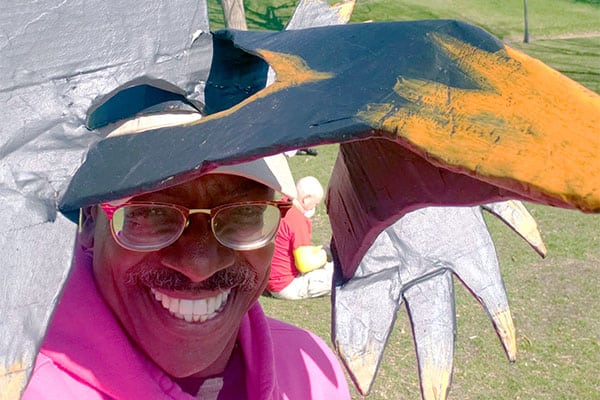