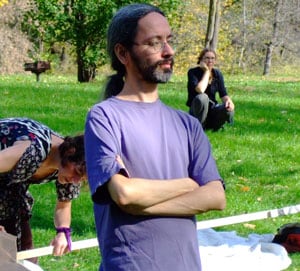 Douglas Saldana strolled into a Halloween Build at Bedlam Theatre one night with a Halloween mix tape that instantly earned him a place in BareBones’ elite cadre.

Douglas, a brilliant and oddball character actor, has been a staple performer at Bedlam ROMPS!, variously as the The Holy Mensa (spiritual leader of the glam-art blood-sport Zamboni), Mothra, Jesse Ventura, several aliens and other bizarre and/or idiotic roles.

Douglas is a staple performer, builder, writer, researcher and dramaturge for BareBones Productions and is occasionally borrowed by Bedlam Theatre for supporting roles in mainstage productions.