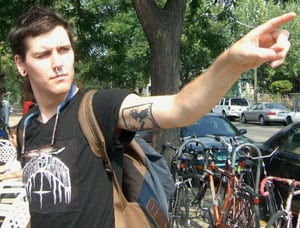 Christopher Allen is a Twin Cities born actor, community arts teacher, printmaker, and set builder. As a child, he began performing in his parent’s basement creating site-specific pieces centering on youth and parental angst. In more recent times Christopher has performed in and built for Barebones Annual Halloween Show since 2006.

He has been working as a performer and company member of Bedlam Theatre since 2007. His most recent work includes set design for Million Dollar Museum at Bedlam Theatre, performing in the 2009 Fringe show Comedy Of Errors, and playing an angst-filled teenager in Joseph Evan’s Turducken.

As well as performing on stage at various Twin Cities Theaters, Christopher enjoys building shadow puppets, paper cuts, and woodcuts. When not working on a show, he is Youth Coordinator at Bedlam, helping Cedar Riverside youth express themselves and each other through community and the performing arts. Most recently in collaboration with Brian Coyle Center youth he organized and created a neighborhood “Urban Safari” parade, teaching nearly 20 kids to stilt.

He was co-director of Barebones Halloween 2009, and delighted to bring a little pure evil into the show.