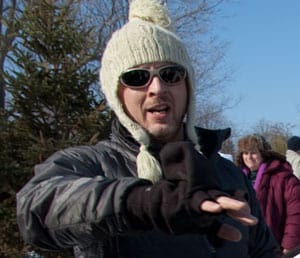 Brent joined BareBones Productions in 1999 as a Puppeteer for “YDK”, was Halloween Usher Coordinator for seven years, and has been Halloween Site Manager and de-facto Fire Safety Coordinator since 2005. Brent has also served on the Board of Directors since 2005 including two years as Chair and three years as Treasurer. He has performed as a pogo-stilter twice for Halloween in the roles of “vampire bat” and “gargoyle”.

In 2006 and 2007, Brent chaired the BareBones Dumpster Duel Coordinating Committee (BBDDCC)  and has performed as a puppeter, stilter, and bicycle puppeteer for various BareBones gigs, notably as a giant, disembodied chain saw on stage at First Avenue in 2000.

In addition to his work with BareBones Productions, Brent has been a regular on the MayDay Parade & Festival scene at In the Heart of the Beast Puppet and Mask Theater in Minneapolis. He built thirteen large puppets for the MayDay Parade as a volunteer between 1998 and 2012, was MayDay Ceremony Stage Manager in 2004 and 2005,  Parade Line-Up Security Coordinator from 2007-2009, and Parade Section Stage Manager in 2911.

Occasionally, Brent can be spotted on the regional puppet, spectacle, and performance scene as a stilter, puppeteer, fire safety spotter, or banjoist, and has fulfilled various performance or backside roles involving the Bayfield Apple Festival, Art Car Parade, Art Shanty Projects, Live Art, Art Sled Rally, and Bedlam Theatre. His jug band, “Sasquatch Wristwatch,” after years of “also ran” anonymity, took Third Place in 2009 & 2010 at the annual Minneapolis “Battle of the Jug Bands” Sunday Afternoon Waffle League at the Cabooze before bringing home the coveted Pancake Griddle for 1st Prize in the Saturday Night Pancake League at the Nomad World Pub in 2011.