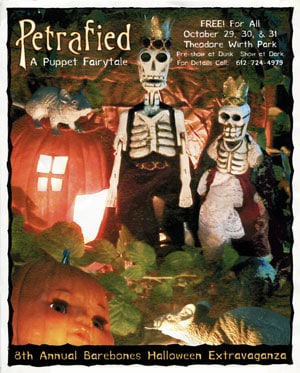 At the time the largest pageant to-date, "Petrafied" was staged in Theodore Wirth Park, Minneapolis.

Something is wrong in the Court of the Dead. The King of the Dead is tricked into eating the Seed of Life and vomits a magical baby's head that devours everything in sight. As it grows larger and louder, the Court tries everything it can to get rid of the child until Earth herself reaches out with gigantic arms and swallows all.

This activity is made possible, in part, by funds provided by the Metropolitan Regional Arts Council from an appropriation by the Minnesota Legislature.